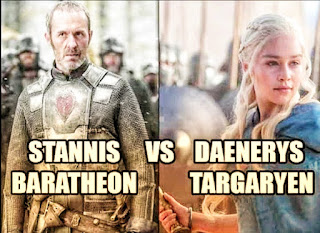 Funny how things come full circle in this story. These characters have as much in common now as they do differences, but the biggest difference is the fanbase of each character.

Stannis Baratheon went North because he knew he was the King of Westeros and it was his duty to do so. He asked for no praise, stopped 100k Wildlings from raping and pillaging the North, and attempted to give Winterfell back to the Starks before he was killed by an oathbreaker who was defending the children of the House he was trying to rescue.

In the process he allows Melisandre to sacrifice his daughter to clear the snows that were destroying his army. None of this was done out of selfish greed, none of it was done for himself but for others. Yet the majority of the fanbase likes to make Stannis Baratheon some evil martyr.

On the other hand, Daenerys Targaryen, now in Westeros is focused on the Throne and that only. She has to be convinced to go North, she never once viewed it as a duty. She made sacrifices to secure the Northern victory but she acts as if she came up and did them a favor as if they should be grateful. That is a tyrannical mindset, she did her duty as the Queen of Westeros because that is what she claims to be so why is she acting as if she did the North a favor?

They did her a favor by helping her save her Kingdoms but she doesn’t view it like that. On top of that and what makes it worse is that now after experiencing loss, she wants to and is being encouraged by her fanbase to burn King’s Landing.

1 million innocent men, women, and children should die because Daenerys is upset she’s had to make sacrifices at war and that’s not fair? But she is still viewed as a hero to her fans and King Stannis, especially to Dany’s fans was wrong and evil? You can’t encourage Daenerys to burn King’s Landing but vilify other characters. Daenerys is a tyrant, acting only on her selfish whims and her fans need a serious reality check.