Skip to content
Learning language becomes most needed skill in today world. Especially in developing countries of North Africa and Middle East and Asian must maintain acquisition of Lingua Franca which stands for universal language, English. Normally the Entire world divided to three sections. One that is Francophone background linguistics moreover to Spanish use countries and Anglo-Saxons countries such as India, South Africa and Egypt.
There are so many contradictions in francophone countries where decision makers don’t have the courage to apply language shift towards Lingua Franca under unknown reasons. Ironically that French tongue is not either their native language as it is the case for French people to be proud of, yet, they cherish this language strangely.  In French today, presentations are presented in English. Noam Chomsky had followed his studies in United States and hd shifted towards English. Only colonies of twenty century cherish the heritage of colonizers as well as his culture.
Language shift becomes an obligation of francophone countries if they dream of getting serious progress in sciences. Thousands of researches are published in English. So the need of this language turned to be serious matter. Language has been and will have been a means of communication after all. In this, when earth habitants speak one language, you should not stay out of the range and talk dead language. << Do what people do in Rome>>.
English is the Lingua Franca of contemporary world. Maybe within next decades will have other raising global language, Mandarin tongue promoted as the new Lingua Franca of trade and politics? Then we will have two options either we obtain capacities of Chinese language or we will be left behind.  French used to be universal language but now it is limited to France, Canada Morocco Algeria Tunisia and other countries of middle Africa.
Here some stats about published books around the globe. We definitely noticed high rates of Deutsch and ENglish articles produced while we observe low production in France. 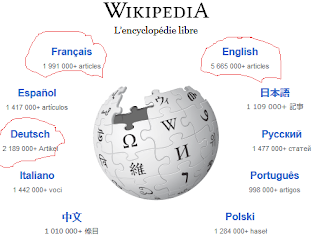 Simplest search keyword you could get impression that French doesn’t exist at all. such information are precious to be aware of in order to plan objectively towards your own goal.