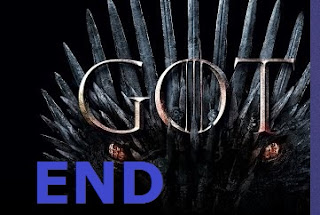 Did anyone else notice the appearance of a flock of birds (possibly crows/ravens) around the Red Keep at the precise moment Dany loses her shit in episode 5? Up until this point in the episode, Dany looks focused, intense, angry, but not insane. Then it’s as if a switch flips in her brain and the slaughter begins.

Listen carefully just before Dany snaps. You’ll hear these birds cawing for a few seconds as the bells get louder and it all blends into a discordant cacophony. It’s the only time in the entire episode I noticed any birds in the sky. After all, even the dumbest seagull would GTFO of King’s Landing in the wake of Dragon’s wrath. I’m choosing to believe that these birds are indeed crows and that their arrival is some kind of signal from the Three-Eyed Raven (a.k.a. Bran but not really Bran) that causes Dany to finally lose her mind and BURN THEM ALL.

This plays into an excellent theory I read on this group last week that the Three-Eyed Raven is actually humanity’s ultimate enemy. He knows all the evil humans have committed over the millennia and he wants to purge Westeros of humanity altogether. Perhaps his true allegiance lies with the Children of the Forest, who fought against the First Men for thousands of years. In a more abstract way, he might even represent the forces of nature coming to reclaim the world.

This is why the Three-Eyed Raven, who now has complete control over Bran’s body, told Jon about his true heritage and why he manipulated Jon into sharing the secret with Dany. He knew full well that this news would tear the two of them apart and drive Dany mad. And he knew that would result in Dany burning King’s Landing to the ground. I don’t think the Three-Eyed Raven‘s plans stop there, either. He wants Dany/Dragon to burn every city/castle in Westeros and kill as many people as possible in the process. After all, what chance do the other cities have if they can take King’s Landing down in a day?

Of course, the Three-Eyed Raven helped humanity defeat the army of the dead. That’s because he didn’t want them taking over and destroying the land, either. He lured the Night King to Winterfell and gave the Valyrian steel dagger to Arya, knowing she was the one person who could destroy him. The Three-Eyed Raven manipulated one of his enemies into taking out the other, without either of them knowing it. After all that build-up, the Night King was little more than a puppet.

This train of thought has also led me to reconsider the Azor Ahai prophecy. We all thought D&D had thrown that prophecy to the wolves (pardon the pun) when Arya killed the Night King. But what if Jon Snow is Azor Ahai after all? Only the darkness (or the Great Other) he has to defeat isn’t the Night King but the Three-Eyed Raven. Before he does this, of course, he has to forge Lightbringer … by plunging it through the heart of his true love: Daenerys.

So, here’s my prediction for the final episode. After another epic CGI battle, Jon kills Dany, but he refuses to claim the throne (if the throne even still exists). He returns to the North and we think it’s all over. But somehow (and I have no idea how this will be revealed), he comes to learn that the Three-Eyed Raven was behind all of the destruction and chaos we’ve seen since the start of the show. He realizes that to save humanity from the ultimate darkness, he has to kill Bran. This might not be as easy as it looks, especially if Bran wargs into some of the local wildlife (a.k.a. Ghost ). But I think he’ll manage it.

The world is saved, but the last true male Stark is dead and the family’s bloodline dies with him. Jon Snow is a hero, but he’s also a queen slayer and a kingslayer. He’s a true king who’s condemned to the fate of a bastard.

Bittersweet enough for you?