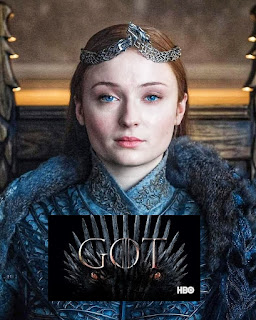 The sort of each personality on the show was perfect let me tell you why! Everything was amazing.

Jon got what he wanted. Tormund always said to him that he belonged in the North. He never wanted to be a king (I think he has said that a zillion times by now), he is just like Aemon Targaryen, he didn’t want It though they both were the heirs (Aemon was next in line before Rhaegar). And if you understand, Jon didn’t settle in castle black because there is NO night watch. For the first time in life, he got what he wanted. He was free. Tyrion and bran tricked everyone (grey worm, Dothraki, Yara, etc) into believing that they have given Jon a life sentence, whereas Bran knew (he always knows) that Jon wanted to go with free folk (his best friend Tormund and ghost) and he let him.

Sansa got what she always wanted. Season 1 episode 1, she quoted that the wanted to be a queen. And she got it and she deserved it. Arya got what she wanted. She always was curious about what’s west of Westeros (she mentioned it in the earlier seasons), and now she will see it. Tyrion was once again honored and got what he always was good at, ‘he drinks and he knows things’.

A Lannister crippled a stark, a Lannister crowned a stark (how effing beautiful and poetic that is). All hail Bran the broken who obviously knew what’s to come. And YES. Bran played the game of thrones better than anyone else. Brienne truly loved Jaime and she made sure to fill those pages on which Jaime was mocked by Jeffery. Jaime got what he wanted. Bran got his castle (we all wanted him to get one, didn’t we?)

Dragon, last dragon of Daenerys, realized the reason for all wars and destroyed it. Also if his mama didn’t get it, why should anyone else? Sam got what he wanted. Grand Master now if you think that how can he be that as he stole from citadel and blah blah. Remember, bran is the king. He can make any kind of changes he wants. Jon snow’s Azor Ahai prophecy came true, didn’t it? He stabbed the woman he loved the most to bring the dawn (dawn = new beginning = freeing people from a tyrant like Dany). And that was the reason of his coming back from death. He united all the people to fight against the night king, and he killed Dany to bring the dawn.

Jon’s heritage revelation was the last nail in the coffin for Dany’s journey towards madness (she was showing the signs since the start ). But the wheel had to be broken. It wasn’t about the rightful heir anymore and AGAIN, He never wanted it. It might not what you expected but since when, GOT has gone with the expected endings? Also, did anyone else notice the gorgeous stark ship (in which Arya was sailing) with house stark banner and the wolf sigil made ‘Queen in the north’ chair?

In the end, I would like to say, NED STARK WOULD BE SO PROUD OF HIS CHILDREN. THE PACK SURVIVED