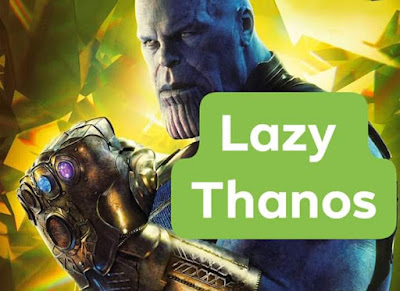 I have never seen an evil character like Thanos. An incredible moving evilness control the soul of his followers. Nebula worshipped Thanos even she considered him as a father, he is not. Russo brothers have terribly succeeded to craft the deepest evil character that history of Marvel has never known.

Thanos philosophy can be seen as a realm for certain groups of future expectations. He dreamed of a better future for the universe. He stated that 50 percent of creatures must for the benefits of the other half to live in prosperity. Yet, apart from estimation Thanos philosophy of being right or wrong, he is really lazy. Thanos cannot do things by his own hands. In each attempt, he needed disciples to manifest the conquest for him. Thanos used his army to extinct half of the titan planet as well as he used the space infinity stone to destroy Asgard. He sent two of his followers to conquer the earth and bring vision and time infinity stones.

Loki the brother of Thor was sent by Thanos to steal tesseract and open the gate for the cosmetic beasts to invade earth. Avengers’ fans may notice the only fight he won using his hands is that against Hulk on Asgard. In each battle, he uses infinity stones to get rid of his enemies. Thanos doesn’t consider fight the ultimate objective of his conquest. He sees the fight as a means to reach the dream of stability between creatures of the universe and natural sources. Thanos in deep feels the suffering of poor children who can’t afford a piece of bread to put stomach.

On Avengers: Endgame, Thanos adored the idea of having infinity stones after Avengers occupied of collecting them and yet he ordered Nebula to look for ironman infinity gauntlet on the epic battle of Avengers: Endgame.

Thanos: Nebula brings the infinity stones.
Nebula: what are you going to do?
Thanos: waiting here

Do you think that Thanos is Lazy, write to us your view?